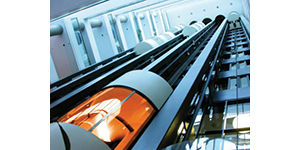 Kubler moves another step further with the implementation of the open-source interface Biss in its absolute encoders: the position and status feedback is transmitted in real time and faster than with standard field bus and Ethernet systems. Motor data and maintenance information can be stored in the encoder and read out. Thanks to the Biss interface, the encoders are especially suitable for the absolute motor feedback.

The bus capable interface Biss is now on the market for twelve years. According to the current status, more than 300 components manufacturers are using the IP, the service and the practical tools of this open-source interface in the drives technology area. This open protocol demonstrates its advantages as soon as high transmission speeds and flexibility are required. The acronym Biss stands for Bidirectional/Serial/Synchronous; it allows the communication between controllers, sensors and actuators with a minimum of implementation work.

"The open interface is compatible with existing standard control hardware; the BiSS master can be implemented quickly and easily - and, above all, without license costs" reports Arnold Hettich, Product Manager for Position and Motion Sensors in the Kubler Group. "A great point is that the resulting cost-efficiency is combined with highest safety standards reaching the SIL3 level."

The lifts sector is a significant branch for the use of encoders. Among others, China and India are currently booming markets. "China is building every year several billion square meters of new living space, and lifts have become an integral part of this activity. And India is following China very closely for the expansion of megacities" says A. Hettich.

On principle, urbanization is opening huge markets for the lifts sector. In a growing market, basically two levers help ensuring competitiveness: innovation and costs reduction. "Transferred on the lifts market, this means that the sector is increasingly relying on innovative technologies to comply with urgent demands for energy saving and environmental protection. New gearless drive systems, energy feedback, smooth running thanks to the reduction of vibrations, as well as modern magnetic materials for better electromagnetic compatibility are only some of the key areas of development. They will play a significant role in shaping the lifts of the future," says the branch expert.

The second level, cost reduction, is sensitive in a prosperous market. "Safety and confidence in the product have priority against rigorous savings. The brand shall not suffer the least damage," points out A. Hettich. Nevertheless, internal economies of scale can be achieved easily by developing product portfolios with many variants based on a common product platform. In conjunction with much technological experience and know how, standardization can influence the product costs.

Encoders for the lift technology

Lifts use encoders to regulate the speed or monitor the position of the drive. They moreover ensure accurate shaft copying and monitor the speed limiters. While, only ten years ago, these tasks were taken in charge by absolute singleturn encoders based on RS422 or RS885 and incremental sin-cos interface, the branch has changed decisively today.

"Many variants now rely on Biss as an open-source interface" reports the expert. With its encoder family Sendix absolute with Biss interface, Kubler is sure to offer the suitable products portfolio for this new branch standard. The Biss encoder family Sendix including the series F36, 58xx and Sendix Atex is available in diameters ranging from 36 mm up to 70 mm. It encompasses optical gear technologies as well as gearless encoders.

Certified according to SIL or equipped with the Intelligent-Scan technology (IST), the whole family has the ability to communicate bidirectionally between the sensor and the actuator. "And it remains fully SSI compatible. Existing standard control hardware therefore is and remains totally usable for the users of the Sendix BiSS encoders. Their digital standard also ensures communicative clarity and simplicity, as well as the largest compatibility possible," explains Arnold Hettich.

The Biss recipe for success

When it was launched on the market, BiSS was confronted to various existing bidirectional interfaces among the position and motion sensors. "At this time, communication was predominantly analog, and the sensor manufacturers were following their own approaches. Special solutions were almost the general rule," remembers the Product Manager. So the logical response was to use an open source solution to create an interface compatible throughout the branch.

And Biss-C offered an open variant in the so-called Continuous Mode. Any number of participants can be connected to a Biss-C mode interface; they can work as well as actors and as sensors and transmit data in parallel through several logical channels. "The C mode can allow avoiding mode switching. Orders can thus be sent from the master to the slave without interrupting the sensor data flow," continues A. Hettich. In detail: the Biss-C mode protocol allows simultaneous transmission of sensor data from all slaves to the master, of actuator data from the master to the slaves and of control data to single or several slaves.

This is why this protocol can meanwhile be found in many types of drives, controls and counter cards. Other general Biss advantages are the maximal user data rate, driver and performance-dependent transmission values of e.g. 10 MHz, 1 km, LVDS 100 Mbit/s, the cyclic reading of sensor data up to 64 bits per slave, as well as the CRCsecured data transmission.

The Sendix 5873 encoder can easily be mounted on direct drives. Its conical shaft ensures highly accurate and direct coupling; a reset button makes commissioning easy. The incremental sin-cos path provides up to 2,048 pulses per revolution. Always equipped with BiSS-C, Kubler also offers special encoders for Functional Safety, which is a decisive criterion for universal usability in lifts.

"Today, drive technology without integrated safety functions, the so-called “drive-based safety," is almost impossible to sell. In order to achieve safe incremental information with our Sendix SIL encoders, the control monitors the validity of the analog sine-cosine signals offset by 90° from each other using the function sin² + cos² = 1 The control achieves safe information about the absolute position by counting the incremental pulses and comparing the result with the absolute position also provided by the encoder," informs A. Hettich.

So the Biss interface quickly established itself firmly in the lift business. "But it is not only suitable for the lift sector, but for all dynamic axes with high accelerations. In the future, Biss-C will be found also in other applications of the drive technology," this is the conviction of the expert.

According to him, a smooth speed control, a very good - bidirectional - repeatability and great position stability are excellent arguments for this. With BiSS, data transmission is digital through a standard two-wire cable, the particular speed resulting directly from the transmission rates of the drive electronics.