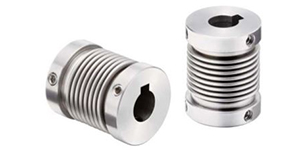 The connection between the axis of the application and the encoder is crucial for an accurate measurement and long service life when measuring speed and position. But, when talking about functional safety, also the mechanical connection plays a significant role.

Generally, the mechanical connection between the shaft of the application and the encoder is achieved using bellows couplings. In addition to allowing a cost-optimized and simple connection, they also compensate angle errors and misalignment.

Manufacturing and installation tolerances as well as the effects of temperature cause alignment errors between shafts in drive engineering which can sometimes lead to extreme overload on the bearings. This may result in increased wear of the bearings and may lead to premature failure of the encoder. The use of couplings can compensate for these alignment errors and therefore reduce the bearing load to a minimum. There are three different alignment errors: the radial, the angular and the axial offset. The following couplings can be used:

Depending on the type of coupling, particular attention should be paid to radial shaft displacement which should be kept as small as possible. Couplings available until now are limiting the torque by slipping when they reach a preset torque value. This is not acceptable when using safe encoders. The market only offers standard bellows couplings or claw couplings. Until now, no combination of both, that is to say of the strengths of both couplings, was available.

Kubler now has developed a coupling having characteristics similar to those of a standard coupling and featuring in the same time an important function for functional safety. It makes sure that the connection between the encoder and the drive element will never break - in any case. Externally, the coupling looks like a normal metal bellows coupling. Its unique characteristic is hidden in the detail: two interlocking claws are located underneath the metal bellows.

In normal operation, they are not meshing and they are separated by a clearance. Only if the bellows breaks because of a failure, the claws go on transferring the movement, ensuring the positive drive of the encoder. This ensures plant availability. The coupling is made of stainless steel and operates in a temperature range from -30°C up to +120°C, correcting angle errors for a maximum shaft offset of ±0.3mm radially, ±0.45mm axially and a maximum angle offset of 3°. Various standard bore diameters are available. 10/10mm; 10/12mm; 12/12mm. The Company is currently developing a coupling certified for explosion-proof atmospheres.