How Important Are IO-Link and OPC-UA for Encoders? 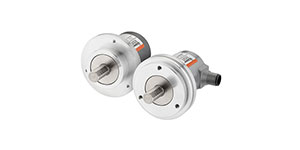 What seemed impossible yesterday has now become reality. We are talking of the Smart Factory. Focus is set on intelligent networking at all levels. But which components will be directly affected? Kubler is convinced that encoders will play a key role in this context. This is why the Sendix F58 encoder has been equipped with the OPC-UA interface. OPC-UA is establishing itself as an important interface within the framework of the IIoT, in particular for cross-system communication (from machine to machine and from machine to the cloud).

OPC-UA can transport machine data. It has the distinctive feature of describing this data semantically in a machine-readable way. It therefore meets an important requirement for IIoT communication. The interface itself is standardized and it is not the special point, but rather the data provided by the encoder. In many specialized forums, the interface is not considered at all up to the Field Device Level of the RAMI model.

Kubler does not consider the encoder as a simple sensor, but rather as an important element in the process of intelligent networking. The combination of the different sensors within an encoder is already under way today, e. g. with the integration of additional inclination angle or gyro sensors, providing a wide variety of figures and information.

But how can this huge range of data be exploited, if a position value is sent every second to the cloud? It would just be impossible, as this data would be totally useless without previous preparation, and the term Big Data would take on a new meaning.

But what happens if the encoder prepares the data itself? For example using the 36-bit position data to generate smaller position ranges and only report in which range the encoder - and therefore the application - is located. So, for example for a storage system, this would allow defining quickly the location and condition of the main warehouse areas. The combination with operating times will furthermore allow deducing the rush hours. And all this without additional work load for the process control.

This is ideal for process optimization. The other on-board sensors allow deriving machine temperature evolution, which has significant influence on mechanics and lubrication, without having to connect, wire and process an additional sensor. This plays an important role in the areas of condition monitoring and predictive maintenance in Scada concepts. The 1:1 relationship to the environment and to the application allows monitoring much more than simply the sensor.

In addition, networking various applications in the cloud will moreover allow for example opening new business models. For example, in the area of wind turbines, data will in the future be sold to meteorological stations - who could know better how fast, how long and from which direction the wind is blowing, also offshore? All that is needed is the access to the data in the cloud to be able to draw proper conclusions from it.

Which functions are possible?

But not only this kind of functions is possible. Thinking about the maintenance of machines, such interfaces also offer advantages - for example with a bar code on the encoder, which can be scanned by the service technician with his smartphone. He thus gets the authentication for consulting encoder data. He receives, in addition to the current encoder status data, the order code, the part number, the serial number and the link to the electronic data sheet.

Thanks to the authentication, encoder configuration via OPC-UA can also be performed particularly easily. Factors such as security and data security naturally play a particular role here. The service technician can use his smartphone e.g. to perform presetting, set the working range and the encoder resolution conveniently, even from his office, which is a great advantage for remote maintenance application such as offshore wind turbines.

The suitable infrastructure must of course be available to send the data into the cloud. Data is forwarded from the machine world into the Internet through a gateway including a firewall and sufficient security measures.