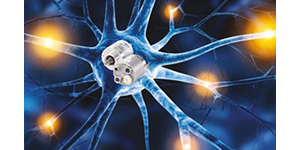 Intelligent networking at all levels is the focus of the so-called Smart Factory. The question is: which components are directly concerned? One thing is clear: nothing will work without sensors, since they are providing all the necessary information. It is also a matter of fact that OPC-UA will prevail as the IIoT standard. It is therefore time to adapt the sensors.

OPC-UA is establishing itself as an important interface within the framework of Industry 4.0 and IIoT. In particular for cross-system communication, that is to say from machine to machine and from machine to the cloud. Because OPC-UA can transport machine data. In addition, this communication protocol stands out as it can be described semantically in a machine-readable way. The interface itself is standardized: not the special features, but the data provided by the encoder.

In many specialized forums, this interface is not considered at all up to the Field Device Level of the RAMI model. Kubler sees the encoder as an important element of the connected world within the framework of intelligent networking. Already today, the combination of the various sensors within one device is going ahead: an example is the integration of additional inclinometers or gyro sensors. This means that the encoder provides numerous parameters and information.

What can be done with the data?

But how can this range of data be exploited, if a position value is sent every second to the cloud? Not at all, as this would be totally useless without previous preparation. But what happens if the encoder prepares the data itself? For example using the 36-bit position data to generate smaller position ranges and only report in which range the encoder - and therefore the application - is located. So, for example for a storage system, this would allow seeing quickly the location and condition of the main warehouse areas and, in combination with the operating times, deducing the rush hours. And all this without additional work load for the process control. This is ideal for process optimization.

The other on-board sensors allow deriving machine temperature evolution, which has significant influence on mechanics, lubrication, etc., without having to connect, wire and process an additional sensor. This plays an important role in Scada concepts, in the areas of condition monitoring and predictive maintenance. The 1:1 relationship to the environment and to the application allows monitoring much more than simply the sensor.

In addition, networking various applications in the cloud will moreover allow opening for example new business models. For example in the area of wind turbines, data will in the future be sold for example to meteorological stations. All they need is the access to the data in the cloud to be able to draw proper conclusions from it.