TURCK 6/11/2018
AS-interface Physical Media Connectivity
AS-interface System Description
AS-interface (commonly referred to as AS-I) is a low-level I/O interface system. It was originally intended to be a simple, low cost system that would be easy to install and maintain. With that philosophy in mind, the original developers designed AS-I as a discrete-only two-wire system. It incorporated features like automatic station addressing, and power and data were carried on a single untwisted pair of wires.
As the demand for AS-I grew, so did the demand for more complex devices. The next major version of AS-I, v2.1, extended the protocol to include seamless transfer of analog data, transmission of simple diagnostic data, and an extended addressing scheme that effectively doubled the number of stations allowed on the network. The newest version of AS-I, v3.0, has gone even further, allowing more options for analog data and much more detailed diagnostic information to be communicated. New versions of AS-I are backward compatible and support slaves from earlier versions. Additionally, AS-I was one of the first network systems to incorporate a safety protocol, allowing emergency-stop and machine-stop systems to be seamlessly integrated with the network.
AS-I can be used as a stand alone network or can be connected to a higher level system, such as DeviceNet or PROFIBUS-DP, through a gateway. The gateway acts as a slave to the higher system and a master to the AS-I system.
Cordsets
Turck offers a complete line of molded AS-I cordsets to facilitate network installation, resulting in a faster start-up and fewer wiring errors. The bus and drop cables are specially designed foil-shielded, high-flex cables with very low inductance and capacitance to minimize propagation delay time. AS-I cables consist of a single untwisted and unshielded wire pair that carries both 30 VDC power and the network data. AS-I was originally designed for use with flat cable using an insulation displacement connection technology, but the use of round cables with sealed connectors has become more common. Turck provides both cable options.
Maximum Ratings
The AS-I system uses a freeform layout topology. Up to 100 m of cable can be used on a segment before a repeater or tuner needs to be installed to allow the network to be extended beyond the 100 m limit. No terminating resistors are required.
Typical System Configuration
Basic Parts List 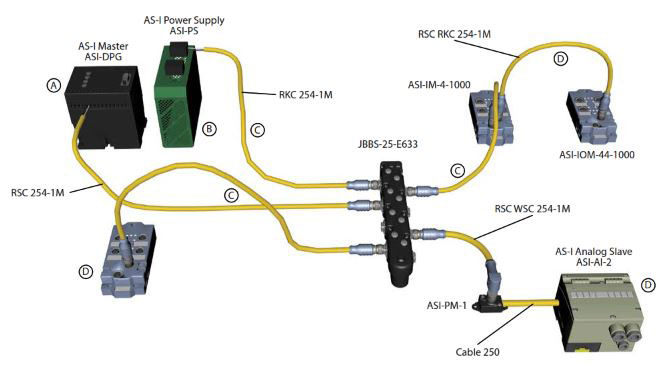 A typical AS-I system consists of the following parts:
• A - Master
• C - AS-I Cable (See N2)
• B - AS-I Power Supply
• D - AS-I I/O Modules (or Slaves)
AS-I stations require a network master (also called a scanner) to interface the stations to the host controller. In some cases the scanner and controller are packaged as a single unit; in other cases the scanner acts as a gateway to a higher level network or to a PLC. Turck AS-I stations are designed to be fully compatible with AS-I equipment from other manufacturers.