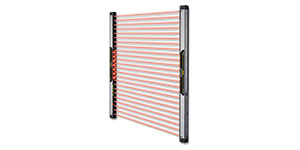 With the recent release of the SF4C light curtain SUNX has expanded its safety product line to greater cover machine safeguarding needs across multiple industries. The SF4C fills a gap in the application coverage of the SF4B series by offering a low profile, type 4 light curtain for smaller machines, while maintaining the high end functionality of the SF4B.

If you decide you need a Type 4 solution based on your risk analysis, it becomes a matter of selecting the correct series based off of the needs of your individual applications. The SF4B series handles the large scale, long range applications, while the SF4C handles the low scale, short range applications. There are, of course, some overlapping models, however, those instances allow our customer more choice based on their individual preferences.

Single Beam Safety
If your safety requirements call for the protection of a smaller area, or body level detection, SUNX also manufactures a type 4, single beam, safety sensor to meet your needs. Up to 6 beams can be connected in series for protection of multiple areas at a time and the available high functionality controller, ST4-C12EX gives the capability of performing three separate muting schemes simultaneously.

Selecting a light curtain for a safeguarding application can be a daunting task due to the amount of available options on the market and the variance between manufacturers. 'Finger safe', 'hand safe', and 'arm safe' are terms that are thrown around with little to no explanation of what they really mean to your application.

For example, it's easy to assume that all finger safe light curtains are equal, when in reality, it's only half the battle. The term 'finger safe' refers to the beam pitch of the light curtain (typically ~10mm), which dictates the smallest object that the curtain can detect. The smaller the beam pitch is, the smaller the object, or body part, that will be detected by the curtain. However, this designation doesn't take into account the speed of the light curtain, which is equally important when selecting a light curtain. Let's dig deeper into the safety requirement themselves.

OSHA provides a generalized equation for how far the light curtain must be placed from the dangerous area of the machine. This is called the safety distance, as seen in the diagram below.

This equation contains variables that are either filled by the specifications of the light curtain or the machine itself. The entire equation is as follows:

For the three types of SF4B offered, the D(pf) value is:

Let's now calculate the portion of the safety distance equation that relates to the light curtain using the SF4B series' specifications:

In comparing models, we see that the effective difference in performance between the finger type and hand type light curtains is a 1.472" gain in your safety distance. In other words, by doubling the beam pitch of the light curtain (and raising the price); you can now mount the light curtain a whopping 1.472" closer to the danger area on the machine.

It's a common mistake to overestimate the needs of a safeguarding application by choosing a light curtain on beam pitch alone. Many users select 'finger safe' light curtains where a hand or arm safe version would provide more then adequate protection. It's a costly mistake as well, being that the price of a light curtain increases as the beam pitch decreases. Do yourself and your finance division a favor and calculate your safety distance before shopping for a light curtain. You might be surprised what you can save.