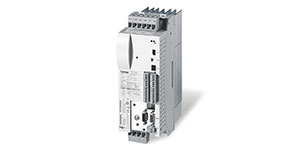 Is it possible to operate two motors parallel with a 9300 Servo and which motor parameters are to be entered?
The operation of two asynchronous motors at one servo controller is possible, if the corresponding selection and the following advices are considered:
• Only identical motors can be used
• They must be coupled shrunk to each other.
• Both motors connected parallel are detected by the drive controller as a summated motor.
• Only one feedback system is to be connected to the drive controller.
• The parallel operation of synchronous motors is not possible.
• Only one KTY temperature sensor is to be connected to the drive controller.
• For the second motor a second thermal monitoring is eventually to be installed (PTY, thermal contact).
Residual current protective devices (RCD): What do you have to observe when using RCDs in connection with drive controllers?
A residual-current device (RCD), similar to a Residual Current Circuit Breaker (RCCB), is an electrical wiring device that disconnects a circuit whenever it detects that the electric current is not balanced between the energized conductor and the return neutral conductor.
During controller operation, there always occur leakage currents of different frequencies. In connection with residual current protective devices (RCDs), these leakage currents are detected as residual currents and may lead to a tripping of the RCD.
Lenze frequency inverters are used in a large number of sectors and applications for electronically adjusting the speed of three-phase asynchronous motors. We offer uniform standard products with flexible scope for use, quick and easy commissioning, reliability and of course high quality. The 9300 vector is a vector-controlled frequency inverter, perfectly equipped for even challenging applications. Excellent drive behaviour, even if not using speed feedback, and undreamed-of scope for solving closed loop and feedback control tasks are just some of the features offered by these frequency inverters.
The 9300 vector is typically used in for example extruders, winders, pumps, compressors, fans, blowers, sawing/cutting drives, textile machines and conveyors. Pluggable screw terminals for digital /analogue inputs and outputs (removable terminal blocks) and Sub-D sockets for feedback and digital frequency signals make possible quick and easy connection of control signals with protection against polarity reversal. All connections can be easily accessed. The selectable form of the V/f characteristic allows the frequency inverters to be adapted to loads with torque requirements rising in a constant or quadratic manner.
The integrated flying restart circuit means that a drive can be easily restarted when the shaft is still turning. It goes without saying that frequency inverters of the 9300 vector control range satisfy EC directives: CE conformity according to the Low-Voltage Directive & CE conformity according to the electromagnetic compatibility directive for a typical drive configuration with frequency inverter. The power level is adapted such that the inverter is only driven to suit the current demand for torque/power. The frequency inverters are preset for standard use. Amongst other things, parameters are set for: controlled acceleration and deceleration using set acceleration and deceleration times & assignment of inputs and outputs with standard functions. Predefined basic configurations are available for challenging applications (e.g. dancer position control, torque control, traversing control, digital frequency coupling).
A large number of subject- and application-oriented menus simplify the process of solving drive tasks and finding the parameters required for this. Example: the key settings for standard applications can be undertaken using the 32 parameters available under the "user menu". The "user menu" can however also be individually modified and set up with frequently used parameters. The 9300 vector frequency inverter can be quickly and easily adapted to individual requirements using the PC and "Global Drive Control" parameter setting/operating software. Simple dialogues (e.g. short setup) ensure a good overview. Alternatively, a plug-on operating keypad is also available. An adjustable slip compensation balances load-related speed variations without costly speed feedback.
The maximum current limiting function ensures stable operation in all operating points under static and dynamic loads. A PTC thermistor can be connected to protect the motor. A bus connection between several Lenze inverters and auto-mation components, for example, can therefore be established at a low wiring cost. More than 100 function blocks e.g. PID controllers, flip flops, counters, comparators, delay elements, logic and mathematical functions can be freely interconnected and made available to the user. In a similar way to a PLC, the 9300 vector can then handle other closed loop and feedback control functions in addition to the actual drive task. Master controls can be relieved or even removed altogether – and all for free. The fact that the function block structure can be freely interconnected also means that the 9300 vector can be easily integrated in machine, system and control concepts without any compromises having to be made. The technology behind Lenze geared motors is coordinated to the 9300 frequency inverters. Commissioning is incredibly simple because the frequency inverter is coordinated to the motor data - there is no need to set parameters for the motor data.