Principal Components of a 3-Phase Capacitor

Principal Components of a 3-Phase Capacitor

The principal components of a 3-phase ABB capacitor include:

One or more self-healing capacitor elements are installed for each phase. These elements are connected in Y or Δ.

In case of dielectric breakdown, the fault is cleared by evaporation of the metalized layer around the breakdown with negligible loss of capacitance and continued operation of the capacitor!

A unique Sequential Protection System including the IPE design (IPE - internally protected elements) ensures that each individual element can be disconnected from the circuit at the end of the element's life. 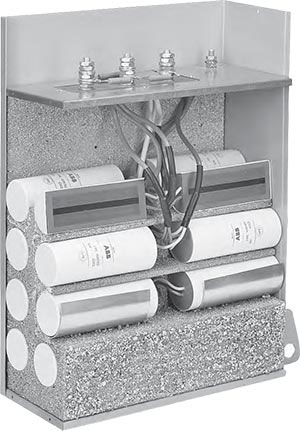 Vermiculite is a dry, granular insulating material that is solid, inert and fire proof. This material fills all open spaces in the enclosure to isolate the capacitor elements and exclude free oxygen.

Discharge resistors (one for each phase) are sized to ensure safe discharge of the capacitor to less than 50 volts in one minute or less as required by the NEC.

Large terminal studs are located inside the enclosure at the top of the capacitor for quick and easy cable connections.

What is a Metallized-Film Element?

Metallized-film is a microscopically thin layer of conducting material (called an electrode), usually aluminum or zinc on an underlying layer of insulating film. The electrode thickness averages only .01 microns while insulating (polypropylene) film ranges from 5 to 10 microns in thickness depending upon the design voltage of the capacitor (the higher the voltage rating, the thicker the insulating film). 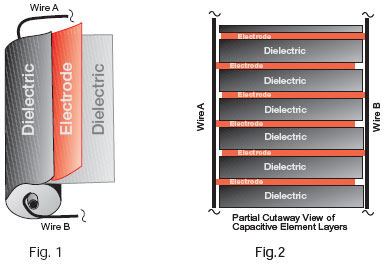 Wires are then connected to each side of the element. The element is enclosed in a container and then filled with a hardening protective sealant.

Self-healing refers to a process where a short circuit between electrodes vaporizes the electrode around the fault until the fault is eliminated. The element continues to function with negligible loss of performance.

Due to the high dielectric efficiency of the metallized-film, the internal losses are extremely low. ABB metallized-film design losses are limited to .5 watts per kvar including the losses across the discharge resistors.

Due to the thin electrode and dielectric, metallized-film elements are small and compact in size resulting in smaller, more powerful capacitors.

More About Self Healing Elements

"Self-healing" is a characteristic which is unique to metallized electrode capacitors. All capacitors normally experience insulation breakdown as a result of the accumulated effect of temperature, voltage stress, impurities in the insulating medium, etc. When this happens in a non-"metallized" design, the electrodes are short-circuited and the capacitor ceases its production of reactive power. In an ABB metallized-film unit, however, these individual insulation breakdowns do not mean the shutdown of the capacitor. The faults self-heal themselves and the capacitor continues operation.

Fig. 3. Two electrodes short circuit through a fault in a dielectric layer.

The conducting electrode is very thin; when a short circuit develops as a result of a fault in the insulating dielectric, the thin electrode vaporizes around the area of the fault. This vaporization continues until sufficient separation exists between the faulted electrodes to overcome the voltage level. 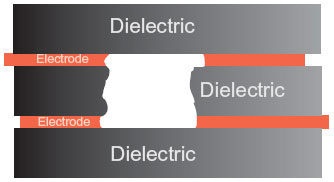 Fig. 4 illustrates "self-healing". The electrode layers in the area where they were short circuiting have been vaporized, thereby eliminating the short circuit.

The entire process of self-healing takes "microseconds" and the amount of electrode which is lost is negligible in comparison to the total surface area of the element. The result is the metallized-film unit may self-heal hundreds of times during its long life and still retain virtually all of its rated capacitance.

ABB's metallized-film self healing capacitor elements will have a longer life than their conventional foil design counterparts for the above reason. However, accumulated effects of time, temperature, voltage stress, etc., eventually effect capacitor life.

ABB's sequential protection system featuring patented Internally Protected Elements (IPE) design provides increased protection to facilities and personnel not available from other capacitor designs. This proven design allows for self-healing throughout the life of the capacitor to insure the maximum length of reliable service and still provide short circuit protection in each element when self-healing can no longer continue. This is accomplished by a combination of unique winding construction and an internal fuse link (See Fig. 5) within each element which safely and selectively disconnects each individual element. ABB capacitors do not rely on mechanical pressure interrupters and additional line fuses have disadvantages associated with that kind of construction.

What are Discharge Resistors?

What is the Significance of Dry Type Design?

ABB Low Voltage capacitors contain no free liquids and are filled with a unique nonflammable granular material called vermiculite. Environmental and personnel concerns associated with leakage or flammability of conventional oil-filled units are eliminated; and kvar for kvar, vermiculite filled units weigh 30% to 60% less than their oil filled counterparts.

Vermiculite is routinely used in the United States as an insulating material in the walls and ceilings of new buildings. Its properties have been extensively documented and recognized as an ideal material for safety and environmental considerations.