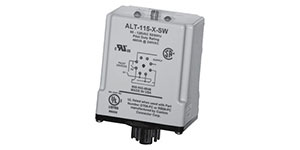 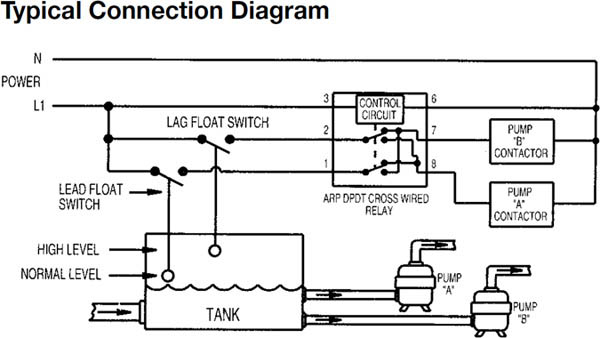 Duplexing:
When an Alternating Relay is internally cross wired, the normal alternating operation is extended to include duplexing. If the Lead Float Switch cycles as previously explained, normal alternating operation will occur. If the Lead Float Switch and the Lag Float Switch close simultaneously, due to a heavy flow into the tank, both pumps A & B will be energized. The ability to alternate the pumps during normal work loads and then operate both when the load is high is called Duplexing. Duplexing relays can save energy in most systems because only one smaller pump is operating most of the time; yet the system has the capacity to handle twice the load.

Many dual pump, duplex pumping applications, require two or more float switches to properly operate the system. The ARP Series of alternating (duplex or cross wired) relays are designed to equalize run time for two loads by automatically changing the "lead pump" and "lag pump" sequence at the end of each cycle. The ARP assures approximately equal wear on both loads, plus the duplexing models allow both pumps to operate simultaneously. This application can be used for water and wastewater pumping; and for circulating and distribution pumping of various liquids.

The diagram depicts a typical drain pumping application. The OFF, Lead and Lag float switches are connected as shown. As the liquid level rises, first the OFF and then the lead float switches close; pump "1" energizes. The liquid is pumped down by pump "1" until the OFF switch opens because of the latching action of the P1 auxiliary contacts on the pumps contactor. As the OFF switch opens, pump "1" turns OFF and the ARP toggles making pump "2" the lead pump. This operation continues with the pumps alternating lead/lag order on each successive cycle. If the flow is too heavy for one pump, the lag float switch eventually closes. Now, both pumps operate until the OFF float switch opens. A benefit of this connection method is the elimination of rapid cycling of the pump motors caused by float switch bounce. 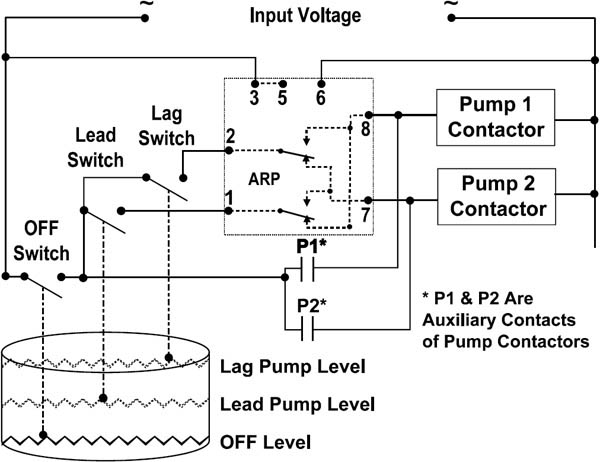 In this application, a TDM delay on make time delay replaces the OFF float switch. In a duplexing pump controller, an OFF switch is installed at a level below the Lead Float Switch. The lead pump starts when the Lead Float Switch closes, and stops when the OFF switch opens. The difference in the position of the switches produces a time delay that prevents rapid cycling of the pump. Because of the installation and maintenance expense associated with all float switches, this solution replaces the OFF float switch with a no maintenance TDM time delay relay.