SymCom Intrinsically-Safe Switch is an isolated UL913 listed device used to interface between hazardous and nonhazardous areas. The input circuitry is designed to never supply excessive energy thus greatly reducing the likelihood of a spark. Provides intrinsically-safe circuits in the following locations: Division 1 and 2, Class I, Groups A, B, C, D; Class II, Groups E, F, G and Class III hazardous locations. Applying electronic controls in hazardous environments can be difficult. Fortunately, Littelfuse intrinsically safe relays and controllers are specifically designed to interface controls between hazardous and non-hazardous areas. Intrinsically safe relays limit the energy that is provided to the hazardous area, thus reducing the potential of a spark. SymCom provides several models of intrinsically safe relays and controllers offering distinct output relay configurations for a variety of systems. One of the most common wastewater lift station configurations is a duplex, pump-down lead-lag system, basically meaning there are two pumps working to remove liquid from a concrete well or pit. In this example, 5 floats are connected to SymCom 155-1 OS and used as fol lows: Lead Float - When closes, indicates that one pump should turn on and begin pumping. If alternation is enabled on SymCom ISS-1 OS, the pump that started second in the last pumping cycle will turn on first. Lag Float - When closes, indicates to Littelfuse ISS-1 OS that a single pump is not enough to pump the liquid level down and the second pump should turn on for additional pumping capacity. High Alarm Float - If the liquid level moves above the high alarm float, SymCom 155-1 OS activates the high alarm and the audible alarm (if applicable) to indicate liquid is coming in faster than the pumps can pump it out. Stop Float -When the liquid level drops below this float switch, Littelfuse 155-105 knows the liquid is at an acceptable level and turns off both pumps. Low Alarm Float - If the liquid ever drops below this float switch, SymCom 155-1 OS activates the low alarm and the audible alarm {if applicable) to indicate the pumps(s) have not shut off and the liquid level is lower than expected. This may be due to the Stop Float being stuck and could lead to pump cavitation. 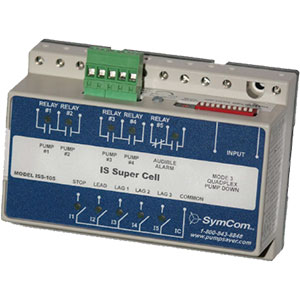