A Comparison of Size 25 Encoders

Introduction
Size 25 encoders (2.5" diameter), along with their size 58 (58 mm diameter) European equivalents, are among the most popular encoders in the world. As a result, nearly every encoder manufacturer in the world makes them. The obvious question, then is what makes the encoders manufactured by Encoder Products Company (EPC) better? The purpose of this Technical Bulletin is to provide a side by side comparison so that you, the user, can make an informed choice.

These comparative features become even more critical at resolutions above 1,200 CPR, since, in order to achieve these higher resolutions, nearly every manufacturer uses a glass disk. Many of the readers of this Bulletin may have heard other encoder manufacturers criticize glass disks, calling them unreliable, fragile, etc. While this may be true for their products, it is certainly not true for EPC's, even in applications with higher levels of shock and vibration. As you will see, EPC has pioneered a number of innovations that solve this problem in all its products, but especially in its Model 725I. This comparison will also highlight those features.

The Other Guys
The typical construction for a Size 25 encoder is shown below. Note the narrow air gap, especially at higher resolutions, and the size and thinness of the disk. In an encoder, the disk is fastened to the rotating hub, while the sensor is mounted to a fixed printed circuit board (PCB). The disk rotating past the sensor produces the signals that become the square wave output. The air gap is adjusted to "calibrate" the encoder and produce the optimal square wave. 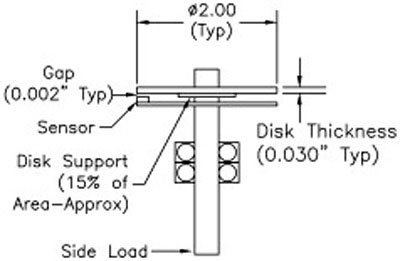 As you can see, because the air gap is narrow, and due to the fact that there is a single set of bearings, it does not take a lot of side loading to move the shaft in such a way that the attached disk will make contact with the sensor or some other portion of the PCB. This side loading can be in the form of a force generated by installation requirements, excess vibration, shock, or other conditions. The result is damage to the disk or sensor, affecting reliability, or, in extreme cases, breakage of the disk.

Also note that the thin (0.030" thick) disk is only supported over 15% of its total surface area. These factors combine to increase the likelihood of fracture even if the contact is only momentary, as might happen with a sudden shock.

Better - The 725N
The 725N was designed to address many of these problems, without affecting the price of the encoder. The first step was a simple one - make the glass thicker - in fact, more than twice as thick, dramatically reducing the chance of breakage. And our proprietary method of disk production reduces the stress and chips in the glass, increasing long term reliability. The next step was to make the disk smaller, minimizing the amount of deflection that can occur in the presence of side loading. Also, the smaller disk is supported over 30% of its surface, making it much more stable in the presence of shock and vibration. The last step was to increase the air gap, which means that the edge of the disk has to travel much further before it even has a chance of contacting the sensor. The combination of these factors makes the 725N much more reliable than competitive designs.

Best - The 725I
The 725I (the "I" Stands for industrial) uses the 725N as a foundation to build an encoder that is as robust as possible within its price category. Using EPC's innovative "encoder-within-an-encoder" design, the 725I adds two extra, heavy-duty bearings to the two contained within the internal encoder for a total of four bearings! These two extra bearing sets are separated in such a way that side load stresses become isolated between the two bearing sets and never reach the encoder. In addition, the internal encoder is mounted to the 725I's housing using EPC's pioneering flex mount, further isolating the internal optics and electronics from damaging shock, vibration, or shaft loading. 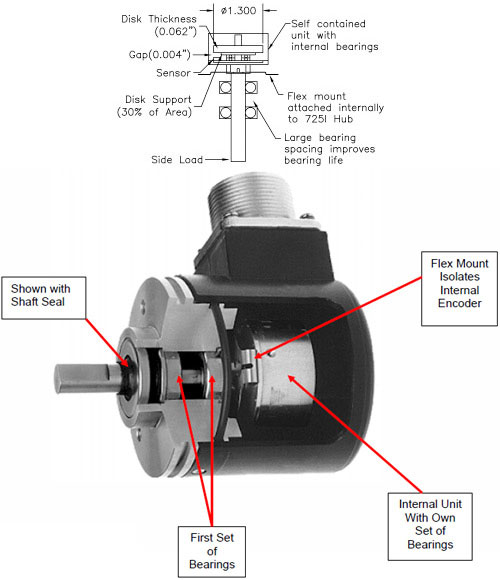 By examining all the design features, and looking at them as a whole, it is obvious why the 725I is the industrial encoder of choice.