What is an Encoder? 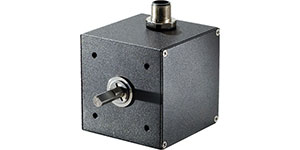 If you search the definition of an encoder, you will get a vast and confusing array of responses. For our purposes, encoders are used in machinery for motion control. Encoders are found in machinery in all industries. You will find encoders used in cut-to-length applications, plotters, robotics, packaging, conveying, automation, sorting, filling, imaging, and many, many more.

What is an Encoder?
You may have never noticed them, but they are there. In this blog post, we will give you a very basic introduction into what an encoder is and what it does.

Simply put, an encoder is a sensing device that provides feedback. Encoders convert motion to an electrical signal that can be read by some type of control device in a motion control system, such as a counter or PLC. The encoder sends a feedback signal that can be used to determine position, count, s peed, or direction. A control device can use this information to send a command for a particular function.

In any application, the process is the same: a count is generated by the encoder and sent to the controller, which then sends a signal to the machine to perform a function.

How Does an Encoder Work? 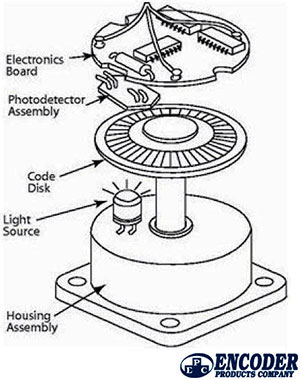 Encoders use different types of technologies to create a signal, including: mechanical, magnetic, resistive and optical – optical being the most common. In optical sensing, the encoder provides feedback based on the interruption of light.

The graphic at right outlines the basic construction of an incremental rotary encoder using optical technology. A beam of light emitted from an LED passes through the Code Disk, which is patterned with opaque lines (much like the spokes on a bike wheel). As the encoder shaft rotates, the light beam from the LED is interrupted by the opaque lines on the Code Disk before being picked up by the Photodetector Assembly.

This produces a pulse signal: light = on; no light = off. The signal is sent to the counter or controller, which will then send the signal to produce the desired function.

What is the Difference Between Absolute & Incremental Encoders?