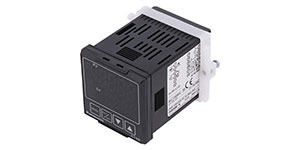 Briefly, the PID algorithm involves three separate constant parameters: the proportional, the integral and derivative values, called P, I, and D. You can think of the algorithm as measuring present errors, accumulation of past errors and prediction of future errors based on the current rate of change. The weighted sum of these three measurements is used to adjust the process as necessary to reach and sustain a set value (SV) typically in temperature.

Our temperature controllers provide heating and/or cooling action as well as an auto-tuning process. The auto-tune process will vary the output of the controller (on/off, or low to high) and monitor the change in response of the process (typically temperature). The function of the auto-tune is after monitoring is completed the controller has calculated an optimal set of PID values to reliably control the process.

Note: every process will have its own optimal PID constants. System or process stability is only as good as the PID constants and the PID algorithm used. In applications where stability based on a specific value (SV) is not critical a Hysteresis can be used instead. Hysteresis doesn't use a set point but instead a range for process control action. For example, instead of controlling the process precisely to a SV of 100°F we can have the controller respond when the present value (PV) is +/- 10°F from SV. This gives us a 20 degree band for hysteresis response. 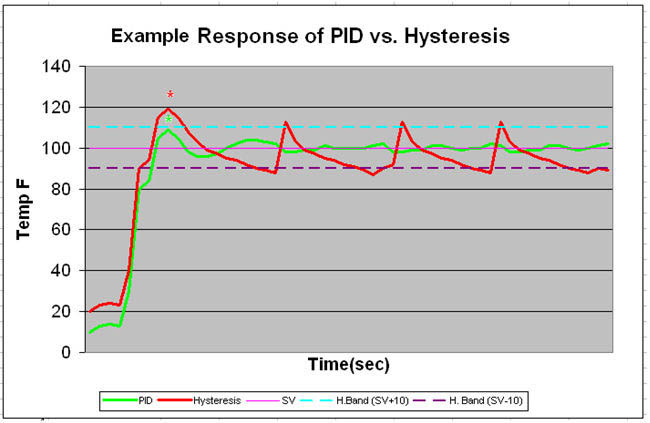 Above is a example of using setpoint control, like PID, verse band control, like hysteresis. The pink line is the setvalue at 100°F. This is the value at which our green wave PID is struggling to hold. This means the PID is constantly working to keep the process at 100°F. During this time the output is constantly oscillating. The hysteresis behaves quite differently however also keep temperature around the SV.

Notice after the first overshoot (see the asterix on the diagram in Fig. 2) the red line, hysteresis, will only turn on again until the temperature drops out of the lower constraint in purple. Hysteresis will constantly turn the output on until temperature rise above the upper constraint, represented by the blue line. Both of these controls have advantages and disadvantage.