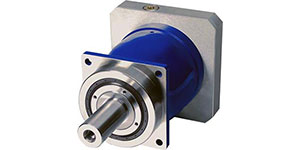 The new sizes MPR 400, 500, 600 and MPG 400 and 600 replace the previous sizes MPR-04 and MPR-05 / MPG-04 and MPG-05 and expand the torque range by up to 4,500 Nm. Performance of VOGEL's gearboxes thus leaps forward to meet the requirements of high-speed servo applications. Just like the smaller ranges, they excel in their maximum flexibility and top-level power density.

MPG and MPR substantially differ in the design of the output end. MPR gearboxes feature a free output shaft without a key but with the options of a key or a DIN 5480 splined shaft. MPG gearboxes have a highly rigid flanged output with substantial mounting positions. By minimising the axial length of the output surface from the roller bearings on the output side, the gearboxes support high radial and axial loads.

Their universal design and simplified yet flexible motor mounting allows both ranges to be installed in any orientation. Users also profit from a wide and continuous ratio range.

No maintenance is required for sizes 050 to 300 and little maintenance for sizes 400 to 600 of the low-backlash planetary gearboxes. Lubrication with synthetic high-performance oils provides the gearboxes with an impressive and above-average life.

Vogel will soon announce the start of series production of the new MPR and MPG ranges. The MPL gearbox range is also new and has already been launched successfully onto the market. The MPL range has been designed and is intended for projects with a restricted budget in automation, robotics, pick-and-place and other applications.

Wilhelm Vogel GmbH works with its customers to develop concepts for the economic design of their application. For this purpose and to find the perfect product solution, the key parameters such as application conditions, loads, service life, speed, motion paths, etc. are evaluated and recorded in advance.

The products made by the medium-sized company based in the industrial region of Stuttgart include angular gearboxes such as spiral bevel gearboxes or bevel helical gearboxes as well as coaxial planetary gearboxes in a wide range of different sizes and versions.